Los Angeles-based painter Kelly Reemtsen 's newest works focus on the subject matter of well-dressed women toting household tools that range from mallets to power saws, each held in a causal position that demonstrates a comfortableness with the object in-hand. Each figure is anonymous, the head of the woman not included in the cropped images of dress, heels, and tool.

The collective works question what makes the modern woman, flouncy dresses coordinating with more masculine tools to showcase the objects’ relatability rather than create a contrast between the woman and her wrenches and shears. The brightly colored impasto paintings each provide a burst of color—yellow, greens, and pinks catching the eye.

Reemtsen just closed a new exhibition of work titled “Smashing” at De Buck Gallery in New York and is also represented by David Klein Gallery, which relocated to Detroit this fall. Her 2013 book “I’m Falling” won both the Independent Spirit Award and 2014 Independent Publisher Books Award. Madrid-based origami enthusiast Gonzalo García Calvo has a knack for fiddling with paper. He uses a variety of different techniques and papers to fold impressive animals, objects, and sci-fi figures designed by a number of top origami artists. By day Gonzalo works professionally as a musician but easily gets lost in the challenge of bringing paper to life in his spare time. Seen here is a collection of my favorites, but you can scroll through Flickr to see more. All photos courtesy the artist. (via Demilked) Animated human flesh is starting to look real by Vlad Savov
Thursday August 13th, 2015 at 9:03 AM

The Verge - All Posts 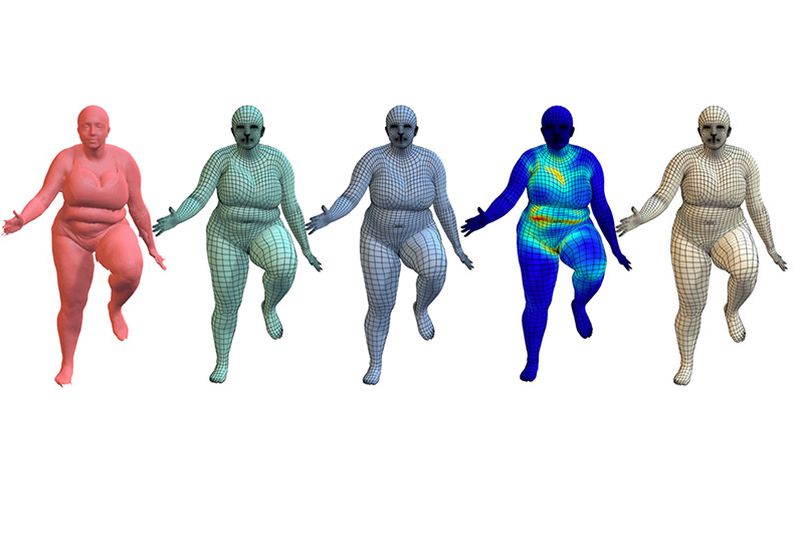 SIGGRAPH 2015 is taking place in LA right now, gathering together the people pushing the boundaries of what's possible to achieve with computer graphics. We've already seen it produce a highly realistic new method for animating clothes, and now a couple of other fascinating projects have been revealed, both of which draw us deeper into the uncanny valley of human simulation.

The first among them is Dyna, which is a system for modeling human soft-tissue deformations caused by motion. Basically, it adds real-world jiggling to the traditionally solid-as-a-rock 3D models of CGI. Researchers from the Max Planck Institute for Intelligent Systems performed 40,000 scans on 10 subjects with varying body shapes and sizes. The ingenuity of their...

Want to meet the real movers and shakers in your industry? Spend your weekends making something. Need/Want co-founder Marshall Haas explains why making stuff is really the way to meet great people:

When you execute on ideas, you are forever associated with a tangible thing. People remember tangibles, not ideas.

Looking back and connecting the dots, I’ve realized that any big career advancements or opportunities that came my way were always linked to something I made, or built. And so, the single best way I’ve found to meet interesting people is to make things, and then share them with the world. You’ll be surprised with who you meet along the way.

As a result of launching a project he had the idea for over one weekend, Haas was able to get a job and start a business with $57,000 through crowd funding. See how Haas did it — and why you should consider doing something similar too — by reading his full story right here.

Plus, if you want some inspiration for your next weekend project and you want to mingle with creative experts at the same time, be sure to learn more about the 99u Conference.

Target designed by Libby Ventura from the Noun Project

Malcolm Gladwell’s popular theory (from the research of Dr. K. Anders Ericsson) of 10,000 hours of practice to become a master is an uplifting bit of motivation. Unfortunately, a recent study found it to not be true. As Fast.co Design explains:

Different levels of deliberate practice can only explain one third of the variation in performance levels in chess players and musicians, the authors found, “leaving the majority of the reliable variance unexplained and potentially explainable by other factors.”

Basically, practice is wonderful and you can’t get better without it, but it takes more than deliberate study to become a master of your craft.

One chess player, for example, had taken 26 years to reach a level that another reached in a mere two years. Clearly, there’s more at work than just the sheer volume of hours practiced, the study (and a similar one by the same authors published in May) argues. “The evidence is quite clear that some people do reach an elite level of performance without copious practice, while other people fail to do so despite copious practice…

So, remember: practice, and practice hard, but take some of that time to find balance so you don’t burn out as well.

Read the rest of the article here.

I’m pretty sure I remember looking at the lock and seeing myself turn the key. Or was that yesterday?

benbz
reply
The door, the kettle, the oven. I do this all the time :D
Next Page of Stories